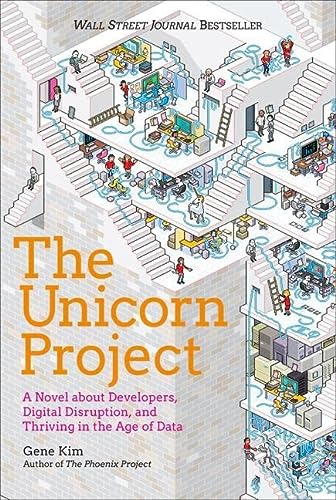 With The Phoenix Project we learned about the Three Ways. Now with The Unicorn Project, Gene Kim introduces the Five Ideals.

This highly anticipated follow-up to the bestselling title The Phoenix Project takes another look at Parts Unlimited, this time from the perspective of software development.

In The Unicorn Project, we follow Maxine, a senior lead developer and architect, as she is exiled to the Phoenix Project, to the horror of her friends and colleagues, as punishment for contributing to a payroll outage. She tries to survive in what feels like a heartless and uncaring bureaucracy and to work within a system where no one can get anything done without endless committees, paperwork, and approvals.

One day, she is approached by a ragtag bunch of misfits who say they want to overthrow the existing order, to liberate developers, to bring joy back to technology work, and to enable the business to win in a time of digital disruption. To her surprise, she finds herself drawn ever further into this movement, eventually becoming one of the leaders of the Rebellion, which puts her in the crosshairs of some familiar and very dangerous enemies.

The Age of Software is here, and another mass extinction event loomsthis is a story about red shirt developers and business leaders working together, racing against time to innovate, survive, and thrive in a time of unprecedented uncertainty...and opportunity.